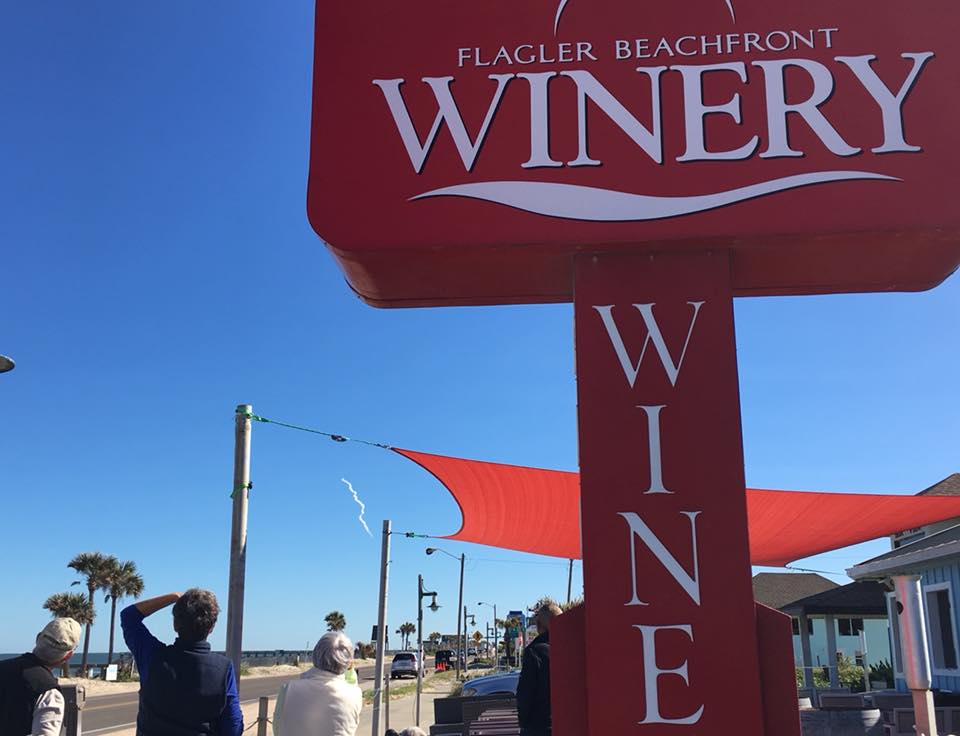 There aren’t many wineries where you can sip a delicious hand-crafted wine overlooking the ocean while seeing a rocket launched into space. In fact, I can think of only one, Flagler Beachfront Winery in Flagler Beach, Florida.

One of a growing number of new Florida wineries, Flagler Beachfront is the creation of Ken and Kelly Tarsitano, winemakers from Ohio who found their dream location at the beach. Steps from the Atlantic Ocean, the winery is the happening place for artists, musicians, travelers, and locals looking for a fun place to relax and enjoy a glass of wine. Occasional rocket launches are a plus.

As a teenager growing up in Tampa in the 1960s, I was fascinated by every space expedition. We had followed John Glenn on our classroom globe in school, and when the big Saturn V rockets came in carrying their three-man crews, we craned our necks out of the windows of the science room trying to see the vapor trail 120 miles away.

So, on July 15, 1969 with my newly acquired Florida driver’s license in hand, I set off with my father and younger siblings to camp out on the banks of the Indian River at Cocoa Beach to see the launch of Apollo 11. Appropriately, we were 11 miles from the launch site and we weren’t really camping, just setting up our lawn chairs on the side of the road, along with one million other people.

All night long we guzzled iced tea and ate my Mom’s fried chicken with potato chips and brownies. We dozed, we made friends, and we waited for dawn. At 9:32 a.m. there was a tremendous roar and the ground shook. Fire shot from beneath the tiny rocket we could barely see across the waterway. Apollo 11 was on its way to the moon.

With my trusty Kodak camera, I recorded the moment. The dot of light I captured on film is nothing like the clear, detailed photos Ken and Kelly take today from their location at the winery, but it has always been special to me. I was THERE!

Sadly, the U.S. space program I followed so faithfully for years is no more. But SpaceX, a private company that manufactures and launches advanced rockets and spacecraft from the Kennedy Space Center has an active launch schedule. The most recent launch was on October 30, 2017 when SpaceX put the Koreasat-5A,  a commercial communications satellite, into orbit. If you were at Flagler Beachfront Winery that day, you would have seen the vapor trail in the sky. That’s the photo at the top of this page, courtesy of Ken.

Next month, (December 2017) SpaceX will launch its first Falcon Heavy rocket, the most powerful rocket since Apollo’s Saturn V.  The date hasn’t yet been announced, but you can check with the Kennedy Space Center calendar here.

As for me, my rocket chasing days are long past, but I do like the idea of sitting at a winery and sipping a lovely Merlot while I watch the waves and wait for the launch.

Flagler Beachfront Winery is one of the featured wineries in Florida Wine Country Guide to Northern Wineries by Pamela Watson. Pick up your copy at most Florida wineries. Soon to be available from Amazon.com.